The social network claims that the new page will make it easier for surfers to control their private information. At the same time, Playboy also announced the removal of its Facebook account

In the midst of the biggest image crisis in its history, Facebook announces that it will launch a new page in which all social privacy settings will be concentrated, which should make it easier for surfers to control and control their private information.

“Last week we saw some more work we have in enforcing our policies and helping people understand how Facebook works, and we found it hard for people to find their privacy settings,” the company explains. As part of the move, Facebook has redesigned the settings menu in the smartphone app, so that the various options are concentrated in one place instead of 20 screens, as it was until now. The company says that now every surfer can clearly check what kind of information he shares with external applications.

In addition, under a new page called “Privacy Shortcuts,” you can check and strengthen your account security and security; Check what personal information you’ve shared on Facebook and what you’ve done, and delete what you do not want to appear; Control which advertising ads you expect; And control who can view your profile information and posts you’ve posted. You will be able to delete, edit and download all the information you are interested in. 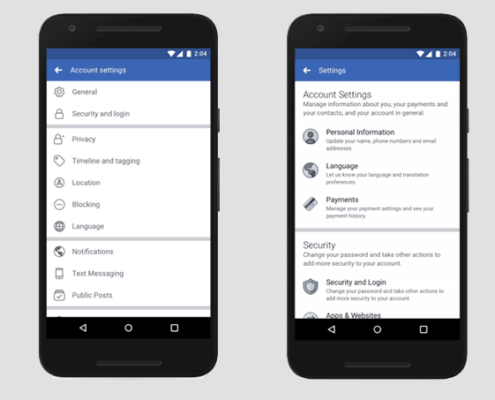 The launch of the new privacy center comes when Facebook is grappling with the Cambridge Analytic case, a company that “sucked” personal data on the company’s 50 million users without their knowledge, and allegedly used information to divert the US elections to Trump, When it became clear that Facebook also collects, through the Facebook Messenger application, detailed and detailed information about the contacts and history of calls and messages of users on Android devices.

As a result of the eavesdropping, a wave of online protests against Facebook arose, including calls to leave and disconnect from the Internet. Some bodies and prominent figures, such as Tesla and Spice-X companies of Elon Musk and Playboy, decided to stop their activity on Facebook and delete their accounts from the social network. According to reports, in the wake of the storm, Facebook has also decided to postpone the launch of its new smart speakers, which was scheduled for May. According to Bloomberg, after the Cambridge Analytic Case, Facebook is now seeking an “in-depth examination” of the ways in which its various products, such as the new speakers, collect information before exposing them.

However, the real reason for launching the new definition center is apparently not the recent scandals, but the imminent entry into force of the European Union’s GDPR directives. These are new regulations to protect privacy, which will require any organization operating on the continent to meet very strict standards regarding the preservation, processing, and transfer of personal data of citizens.

Want to join the discussion?
Feel free to contribute!